On the first of May this year it snowed, blighting the blossoms of the cornelian cherry trees for the second year running.1 I had never heard of cornelian cherries before I came to Armenia, and when our host family in Goris first pressed them on us (‘They’re healthy: eat!’), in the fall of 2008, I was hesitant. I of course ran to the dictionary (who wouldn’t?), which told me that հոն (hon) meant: ‘cornelian cherry’.2 This was not very helpful. Even though they are roughly the size of a cherry, and are a fleshy fruit with a pit, the հոն taste more like a cranberry, and physically resemble a bright red olive, rather than the more familiar sweet or sour cherries:3 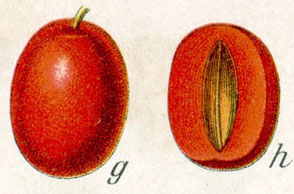 I was pleasantly surprised to find that the cornelian cherry, a member of the dogwood family, has a rich history, which you can read about in a clear and concise article [pdf!] from the Arnold Arboretum. Though of course it is worth mentioning that the seeds of cornelian cherries turned up at the Neolithic settlements at Makriyalos, in northern Greece,4 They also make a less appealing appearance in the Odyssey as pig fodder:

Circe threw them acorns and cornel fruit to gnaw, which the grunting swine ate thereafter. (10.241–3)5

Right around the time I was reading that fibers from the cornel tree were used to make the Gordian knot, I realized that I was losing track of what I was interested in: how the cornels are used in Armenia.

If you catch a cold in the winter and your neighbors hear you coughing, they will bring you a jar of cornelian cherries in syrup (also known as մուրաբա (muraba), which some people like to translate as jam, but it isn’t, it’s fruit preserved in syrup); you are to drop at least one big spoonful in a cup of hot tea and drink it right down, chewing the flesh off the fruit and swallowing the pits: it will cure what ails you.7 Given the high levels of vitamin C in them, it might indeed – though hot tea and lots of rest will probably do more to improve your health. They also make vodka from it, and the resulting liquor is more delicate and flavorful than the diesel-odored, 70% alcohol թթի օղի8 (mulberry vodka) and much more rare.