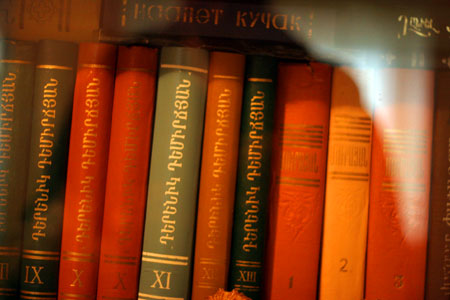 …in the course of the years the study of foreign languages had become almost a mania with Chwostik, indeed a sort of collector’s mania (as exemplified by his acquiring Armenian as a particularly exquisite ‘piece’)…

This is how we spent our morning: sitting on the floor next to the heater, poring canonically through our grammar books, finding here a rule and there an exception, and in yet another place something as yet incomprehensible. Of late, I have been particularly enjoying Armenian verbs1. For one thing, they are relatively simple to form, and for the most part extremely regular, with two conjugations and a few oddities. For another, they have these infixes that seem so minute (a letter or two) and yet change the meaning entirely, making this intransitive verb transitive, or that other one reflexive or passive; this seems to me, for reasons I cannot quite fathom, an economical and elegant way of putting together a language.

Take, for instance, the verb ‘to learn’: սովորել(soverel); add the causative infix –ցն (tsn) and you have ‘to teach’: սովորեցնել (soveretsnel).2 The way the infix creates associates between actions which one may or may not think of as connected is quite pleasing. To remember հիշել (hishel) can become to remind հիշեցնել (hishetsnel), to be happy ուրախանալ (urakhanal), to make happy ուրախացբել (urakhatsnel). That’s one thing.

Then there’s the reflexive or passive or medio-passive or the whatever you want to call it –վ (v) infix.3 So one has ‘to write’ գրել (grel) and ‘to be written’ գրվել (grvel), to read կարդալ (kardal) and ‘to be read’ կարդացվել (kardatsvel); ‘to shave’ սափրել (sap’rel), ‘to shave oneself’ սափրվել (sap’rvel). For -el conjugation verbs, one can also combine the causative and -v infixes for even more amusement and confusion.4 So ‘to make someone shave’ սափրեցնել (sap’retsnel) and ‘to make someone shave themselves’ սափրեցվել (sap’retsvel). I should here mention that this last is, although grammatically possible, not something that I’ve actually heard, and so one might say that it is not actually Armenian, but if it’s not Armenian, then what is it? I don’t know.