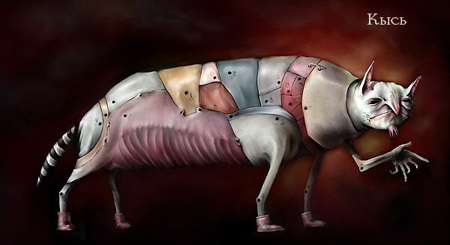 One could call Tatyana Tolstaya’s The Slynx a post-apocalyptic dystopia – perhaps compare it to similar novels (1984, Fahrenheit 451, A Clockwork Orange, &c.) – and one would not err in one’s assessment or criticism. That is certainly how it starts, and the details are amusing enough: the ‘Blast’ that destroyed civilization as one knew it, the genetic mutations, the semi-immortal ‘Oldeners’ (survivors of the Blast), mice as primary food source and currency – all written up in malaprop-ish dialect. Left there it would be an amusing criticism of (post-)Soviet Russia, and no one would think the worse of it.

To me, though, The Slynx really begins and ends with the love of books. Benedikt, the main character, begins as a scribe, copying out old books (Pushkin & co.1 ) ascribed to the reigning petty ruler, Fyodor Kuzmich, Glorybe. Benedikt is curious about these poems, but not obsessed – unlike one of his coworkers who really tries to understand what she is copying: what is a steed? she wonders (Benedikt imagines it must be some kind of mouse and is irritated by her curiosity). After his marriage to the wealthiest and loveliest of his co-workers, after he has his tail removed, after he begins living a life of comfort, of buttery biscuits and pancakes instead of mouse stew, Benedikt begins to read in earnest: he has nothing better to do, no real job, no occupation beyond canoodling with his oversexed wife.

After the marriage Benedikt didn’t need anything at first. For about two weeks, maybe three. Well … four. Maybe five. While he got used to things, had a look around at this and that. But then – it felt like there was something – and it was gone. […] He thought and thought. What was missing? Suddenly he realized. It hit him. Books! He hadn’t read any books for a long time, or copied them, or held them in his hands! Since May!(157–164)

With a limited supply of books before his marriage, reading sparked his imagination. Benedikt day-dreamt of the past, of women, of the unseeable, terrible Slynx haunting the shadows beyond the pale. After his marriage. Benedikt suffers a surfeit of books; these bring back his ‘visions’ but also become an appetite of their own. He is helped (enabled would perhaps be a better word) by his father-in-law, the Head Saniturion. Books, you see, bring Illness – which seems to be related to freedom of thought.2 The Head Saniturion works to prevent and eradicate this Illness; he confiscates books, and disposes of people who seem to have read them. As a result of his work, he has a fine library of material, which he puts at Benedikt’s disposal. Benedikt begins by looking at pictures, but then devours adventure novels, knitting manuals, and philosophy; he reads everything, until there is nothing new left to read:

Afraid of guessing, Benedikt went through the treasures with shaking hands; he was no longer thinking about issue number eight. It’s not here, I’ll live. But book after book, journal after journal – he’s already seen this, read this, this, this, this, this … So what did this mean? Had he already read everything? Now what was he going to read? And tomorrow? A year from now? His mouth went dry and his legs felt weak. He lifted the candle high; its bluish light parted the darkness and danced on the shelves along the books’ covers … maybe, up on the top … (192)

Nothing good comes of this appetite for books, except an appetite for answers, for the one book which will answer everything. He doesn’t find it, of course, and wanders, slynx-like, on the periphery of the settlement, searching. The search is all that remains.