I have little more to say. If my readers find that I have not said enough, I have said too much. I cannot measure or judge of such a character as hers. I cannot map out vices, and virtues, and debateable land.

There is no muse of biography.1 If we were having this conversation two hundred years ago, you or I might say that Clio would fill the role, for what is biography but the history of a person’s life? Then we would be muddled by what ‘history’ meant and what ‘life’ entailed; so that particular definition suffices only if one is content to look solely at appearances, pay court to chronologies and topologies, play Plutarch and make a moral, but these surfaces seem insufficient, somehow, at present. I’ve been reading a few biographies lately – they are more satisfying in a way than novels, for they have the pretension of truth about them, and my interest in the subject feels more interested, less futile.2 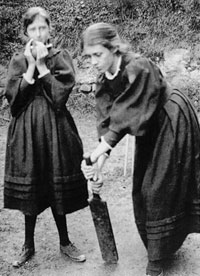 There are problems peculiar to biography, however, and reading so many life-stories in a row, these problems forced themselves upon my attention.3 There is the difficulty of the foregone conclusion (the subject dies), the difficulty of finding something new to say about the subject (which some biographers omit), and finally the difficulty any author faces, of not alienating the reader. This last is doubly hard, as the biographer is responsible not only for their own intrusions into the text, but also for sustaining an interest in their subject who, on closer reading, may not be as appealing as the reader imagined on setting out.4

This absurd preface is nothing more than thumb-twiddling, because Hermione Lee’s biography of Virginia Woolf, is quite well done, and my problem here is with the reader of the life, with his or her prejudices, ignorance, and other limitations. To begin with prejudice: repetition, when it does not illuminate, is to me an obnoxious thing. I do not imagine I am innocent of this fault; perhaps my guilt leads me to detest it more than I ought. In any case, it is a prejudice, and as such I acknowledge it. An example: the constant recurrence (once every hundred pages or so) to Gerald Duckworth’s ‘interference’ with Virginia Stephen in the text irritated me – not least because it was so vague, so dependent on speculation, and its importance and impact so questionable.5 Why bother, if it cannot be known? Why speculate, if the argument is so tenuous?6 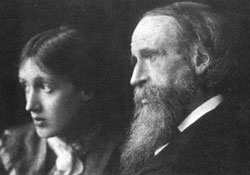 The second fault of the reader: ignorance. I hadn’t realized, for example, I was supposed to know that Leslie Stephen was so horrible to his family. After reading this particular biography, I still don’t understand exactly how he was so horrible – beyond being emotionally abusive and overbearing in best imperial late Victorian fashion – but I take it on credit that he was.7 I fail to see that the Stephens where significantly worse off for having such an irritable patriarch than any of the thousands of young people who lived at the same time whom no one has ever heard of. You will perhaps say that their intelligence and sensitivity would have made it especially trying for them; rubbish, I say, as they had opportunities enough to make something of themselves, and did, and my congratulations to them, but keep your psychological cant to yourself.

Finally, the limits of indiscrete curiosity: for all that Leonard Woolf was an important person in Virginia’s life, there was surprisingly little of him to be found in Lee’s book. Of course it wasn’t Lenny & Ginny: Portrait of a Marriage, but still, he comes across as a cipher. This is not Lee’s fault, as even Victoria Glendinning’s biography of Leonard left one with little sense of his character – or rather, little way to resolve the contradictions.8 He’s not a particularly appealing personality, it’s true, but he needs making sense of, and shouldn’t be set at naught. The biography, by the limits of its coverage, raises more questions than it answers; which is fine for the thesis mill, but less amusing to the general reader.