After much consideration of this point, I came to the resolution of writing truly, if I wrote at all; of withholding nothing, though some things, from their very nature, could not be spoken of so fully as others. 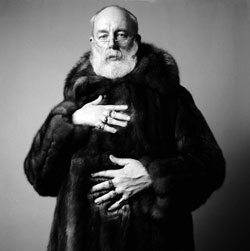 Mr. Theroux’s excursion about Gorey is not precisely a biography; rather, it falls into the queasy middle ground of reminiscences, or bloated magazine profiles. The author will keep intruding himself into the text as though he thought himself of equal interest to the reader as his subject. This is satisfactory in the case of Boswell, for he keeps his subject firmly on a pedestal; but Mr. Theroux is always chipping away and digressing and divulging personal details about his own life that in no way clarify Gorey’s own personality for the reader; indeed, he shares so much that one begins to doubt his competence to share anything at all. For example:

He did have close friends, insofar as people like Gorey have friends, but most people in his case, I am fully convinced, were made – kept as – acquaintances. Did he compartmentalize? I was told by several good folk who, having attended his Memorial Service (I myself could not bear to attend), were struck by how many people who claimed to be his best friend did not know each other (30f.)

These few sentences about the ‘compartmentalization’ of Gorey’s friendships is interesting at first glance, but there are two points of irritation: why could Theroux not bear to attend Gorey’s Memorial Service1; and what does is say about the actual closeness of Theroux’s friendship with Gorey (of which much is made throughout the book and in the reportage about the book), that Gorey did not apparently have a circle of friends, but rather a constellation of acquaintances? Theroux goes nowhere with this, and it is a shame. It could merely be a fault of composition;2 even so, even as a rambling assemblage devoid of critical consciousness in which the reader is expected to find his or her own way, and see the connections or inferences the author intends or imagines, the author is still responsible for leaving a path for the reader to follow, as Gorey so exquisitely does in his own work and as Theroux so signally fails to do in this volume. One keeps reading with a stubborn fascination, to see if it really could be such a muddle as the author appears to be making of it – and, yes, it is.3