We’ve been waiting for the school to be remodeled for a long time. We were supposed, at first, to move in on the first of September 2008; this was quickly adjusted to 1 Sept. 2009. Knowledge day1 came and went and the building was still not ready. The director clenched and fretted in her tiny makeshift office, but the workmen could not or would not hurry things along. The date changed to October first, then November, and finally in December they said, well, maybe in February. But then on the second trucks came ’round to the temporary building2 and all the male teachers and the oldest male students started packing furniture to take over to the remodeled school.

The remodeling was, finally, nearly complete. The school needed to be cleaned, of course, and everyone had a different idea how this cleaning was to be done. Some said the parents should do it; some said the female students; and finally everyone agreed it would be best to hire some women from the town to do it. Which they did, during an impromptu break given by the Ministry of Science & Education due to an outbreak of seasonal flu.3

The new school is large and airy and bright, and almost every subject has its own room.4 I was quite pleased because moving into the new building meant that the foreign language centre5 for which I had written a grant could finally be assembled in some sort of usable form. And the heaters work! Definite cause for celebration and congratulation.

After the last of the teachers’ meetings before the winter break, I brought in a carefully wrapped Armenian translation of Black Garden and gave it to my director to congratulate her on the completion of the remodeling. It’s the first time in eighteen months that I’ve ever seen her look entirely pleased at anything. I’d forgotten to inscribe it, though.6 So the director called me in the next day and made me inscribe it, in Armenian, for her amusement. I had been afraid that she would be offended by the book, as it is not uncritical of Armenia, but she didn’t seem to mind at all, and thought it rather sweet that I would give her a history book, since she is a history ‘specialist’.7

The teacher with whom I regularly worked was a bit worried when she heard that the director wanted to see me so urgently, and when she heard that I had given her a book she wasn’t at first sure why. For Christmas? For New Year’s? When I told her, though, she relaxed and laughed and said that I had շնորհք (shnorhq) which is one of those untranslatable words that means something like aptitude or talent, but also means a gift for doing the right thing at a given moment. Shnorhq and a new English room. It’s been a good year. 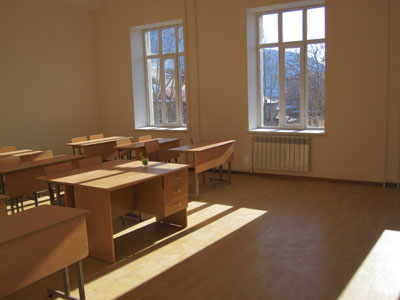