Please, he said, don’t abandon me to all these people who are so certain about everything, they’re dreadful. You don’t need me, I said, don’t talk nonsense, the whole world admires you, I was the one who needed you, but now it’s time to stop, that’s all. (99)

An odd book, not quite a lament for Lisbon, for Pessoa, for the narrator’s own youth, but something else. A dreamlike ramble through the uncertain geography of a town that somehow suggests the smell of sun and fish and vines. Our narrator wanders streets, in and out of buildings connected with his own life, with the life of his friend – who I am told is meant to suggest Pessoa, though I am not learned enough to see the similarity. There’s always the suggestion that the narrator is moving without legs, drifting, as in a dream, from one place to another with no attention to the distance between them.1 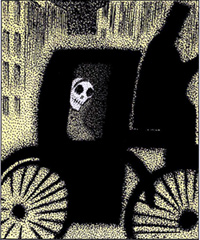 It is curious that Tabucchi decided to write Requiem in Portuguese. In one of my moments of lesser attention, I had thought that the writer was Portuguese (after all the title page said: ‘translated from the Portuguese’), and was surprised at how similar it felt not to Pessoa or Saramago, but to Dino Buzzati (an excerpt from whose eerie Poem Strip is pictured to the left) or Stefano Benni. What makes the difference? A more frenetic quality, a deeper sense of the absurd, a quickness; it is pointless to continue this train of adjectives, because I won’t be able to justify what was and is merely an intuitive impression, perhaps suggested not by the style (muffled as such things are by translation) but by the author’s name or something else that refuses to present itself to my mind at the present moment. Of course Pessoa wrote in languages not his own, and perhaps the choice is meant to suggest that, to present the author and his muse/idol on equal footing.2 Requiem refuses this as a handle for understanding, at least to me. Perhaps others will have better luck with it.