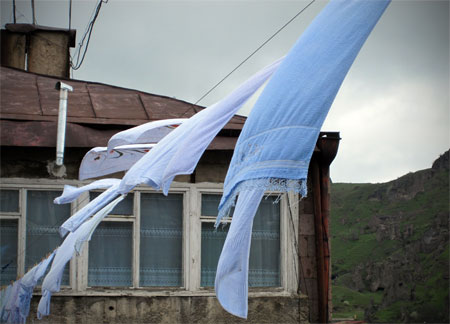 The view from the kitchen.1

The landlord came to the apartment to repair the leaky sink in the kitchen, which was leaky because the neighbors are doing some remodeling and wanted to separate our plumbing from theirs. The landlord works long hours, and has to deal with people who don’t always want to do what they should do – especially regarding paying money; the landlord’s job doesn’t really have anything to do with this. He stopped by around eight o’clock in the evening and went into the kitchen; he’d just come from work, and was still in his work clothes.

At this point I should mention that I am not fond of housekeeping. Whatever talents I have, tidiness does not stand at the forefront. The kitchen floor reflects that fact. We sweep it – occasionally. We mop it – twice a year. The previous two tenants subscribed to similar theories of housekeeping, and the kitchen floor reflects that as well. If it were my apartment (in the sense of ownership, rather than tenantship) I would not bother cleaning the floor in the kitchen. I would completely gut the kitchen and remodel it, because the filthy floors are the least of that kitchen’s problems.2 I don’t particularly mind, because, well, I don’t particularly care – and I don’t view the cleanliness of my kitchen floors as the best measure of my character or worth as a human being. But I still did not like it when our landlord said we needed to clean the floors ‘using hot water’.3

Of course, mostly I just don’t like being told what to do. Especially if it involves me scrubbing floors on my hands and knees with an oversized toothbrush because the mop doesn’t get any traction on these floors and has in any case disintegrated after decades of abuse. I’d just prefer not to.