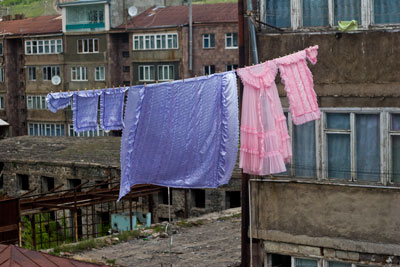 She’s down on the street, and she says it’s a good bargain. The woman on the second floor shakes her head and makes a sleepy downward swat of the hand to signify disagreement. The woman on the fourth floor shouts down and asks how many there are. The woman on the street flings her right arm upward, generously, praisingly, and says there are enough. A woman on the third floor points out the distant plains to her baby, whose mouth drops open in surprise, allowing her to spoon in some porridge. The baby shakes its head. A child tugs at the curtain next to her and looks down at the street. The baby is distracted into another mouthful.

The woman on the balcony upstairs is crying, low humming moans punctuated by sobs; I can see one of her hands spasmodically grasp the splintery wood of the railing will the other covers her eyes. A second voice croons; it seemed at first just the hum of the rain, but it is a sound of comfort. The hand on to the railing begins to relax.

Just around the corner of the building, in the new sunlight that comes after the sudden brutal summer rain, three boys are playing at the drinking fountain, collecting puddle water in a glass, diluting it at the fountain, and flinging the water at a garage door to form endlessly new patterns that wash away with the next rain. An older brother rounds the corner, shakes his head and says it’s not allowed; he continue on towards the center of town. The boys decide to use a discarded water bottle instead of a glass.

A trailer has brought a car from the Kapan road; it is a Volkswagen, new and silver, but the front is crumpled and three of the tires are flat. It pulls into the driveway of the apartment building, next to the dark Ladas and Zhigulis and pauses. A woman leans out of a third-story window and shouts at one of the boys, who shrugs and continues playing. The trailer backs up, across the almost empty road into the police station compound. Three dogs disagree in the middle of the road, just next to a fan of cigarette butts and other detritus washed out of the gutters by the storm.