I was working one day for a poetry competition and had written one line – ‘Beauty makes crime noble’ – when I was interrupted by a criticism flung at me from behind by T.S. Eliot. ‘What does that mean? How can crime be noble?’ He had, I noticed, grown a mustache.

Between the limits of affection and antipathy for the author’s personality, the relationship of author and reader may take a score of different forms: admiration and respect without affection, as in the case, perhaps, of Thomas Hardy; exasperated affection as in the case of Kipling; devotion for Jane Austen; sheer worship or utter dislike for Dickens – with every reader and every author the relationship varies somewhat; but consciously or unconsciously, on both sides, it exists.

The writer himself addresses himself to a certain public – it may be a very vague entity at the back of his mind or it may be a definitely conceived mentality – and he adjusts his emphasis accordingly.

A work of fiction, in fact, involves a triple relationship between author, characters, and reader; and not, as one is sometimes inclined to assume, a relationship merely between reader and characters.

For the aim of the author is not simply to recount certain imaginary happenings to certain imaginary people. It is to communicate to the reader the excitement evoked in himself by the contemplation of some character or incident or aspect of life; to induce in the reader a mood related to his own, to reach through the mind of the reader to his emotions, to play on his feelings as an orator or as an actor plays on the feelings of his audience.

But it is also to control the reader’s judgment through his imagination; to induce him to adopt for the time being certain values, a code, that is not his normal code. He, the reader, may indeed wriggle a trifle as he does so; or he may, on the other hand, deceive himself into imagining that these bold, dashing views or this acute sensibility, this tolerant broadmindedness or passionate sympathy for the unhappy and the oppressed, are a natural expression of his own temperament.

Life is too short for this book which smells of potpourri and afternoons misspent in faded floretry. I cannot tell whether it is the cloying stink or the dullness of the matter (promising to tend where I do not care to follow: to gossip and muddle and the human failing of overestimated importance) that caused me to set this book aside. I will not give its title, because its particularity is not important.

It was foggy this morning; the afternoon’s bread & margarine and coffee helped clear the skies.

The houses between which the action uncertainly scuttles have the ungenial impersonality of the re-used backdrop, and at the corner of the garden one feels the outlines of a gazebo, lattice white, meant to suggest gentility to less subtle minds. Finally, it is shocking – so to fall off as precisely to say that this person loves that one. But the thing is done: the child is dead and she killed it, with motives so explicitly brought forth that the reader quavers between amusement and disgust. Above all, the absolute lack of anyone hanging fire, even when it would do them good. It seems not at all like Henry James, not even a dramatic Henry James, but perhaps some hitherto unknown second cousin (perhaps called Clarence) or failing that, Wilkie Collins. 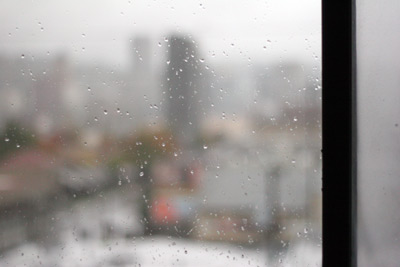 We find under the weather a layer of sun, wrapped tidily around that parcel of time we call today.

The year therefore rounded itself as a receptacle of retarded knowledge – a cup brimming over with the sense that now at least she was learning.

Since selling off most of the books earlier this year, I’ve been trying to avoid purchasing more, which has led to increased, or perhaps simply more self-conscious library usage. The following are the books I have most recently checked out of the public and local university libraries (including three interlibrary loans):

There are twenty long days before me in which to read (or decide not to read) these books, and I am filled with boundless hope.