It rained most of the day.

It’s dreary out. He is a learned man, and has a power of college-books by heart: his greatest fault is, that he incessantly quotes passages from them in conversation, which is not agreeable to everybody. —Alain-Renée Lesage (Gil Blas, vol. 1, p. 149 (II.ix))1 Years ago my mother used to say to me, she’d say, […]

Reading at the window, December 2013. There were too many things to do this summer, each day crowded with too of the little nothings that are so necessary if anything is going to happen. Now, though, projects are winding down, and there’s nothing to do but bustle about and procrastinate on those last few things […]

Evidence of a brief excursion outdoors. There’s a fire in the fireplace. There are books on the table. It’s misting outside in the true Oregon manner. 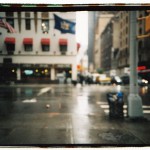 Near the end of the road.

Walked out in the downpour to pick up holds from the library – a biography of Walter Benjamin and Black Jacobins by C. L. R. James, neither of which I am likely to read at the moment but which did, however, give me a destination. Mostly I wanted to be out walking in the rain […]