NB: This entry was initially published as a page to solicit donations to fund a project supporting the library; the campaign was successful.

Goris is a small town located in the rugged mountains of Syuniq marz, which is the southernmost region in Armenia. Once the cultural center of the region, its situation on the road from Yerevan to both Stepanakert and Iran ensures its importance, although the main administration of the region has moved south to Kapan.

I have been living in Goris for the past two and a half years as a volunteer with the US Peace Corps. Last summer (2010), I was happy to see that a group of local Armenian volunteers were planning to help out at the library, repairing books and adding shelf-markers to the stacks. (You can see pictures of the project on flickr.) I noticed, though, that the volunteers were using scotch-tape and ordinary glue to repair the books, neither of which is acid-free and thus liable to do more damage than they repaired. In talking to the librarian about the matter, she pointed out that the library had bigger problems than damaged books. We were in the main room of the library – not the most welcoming of places: 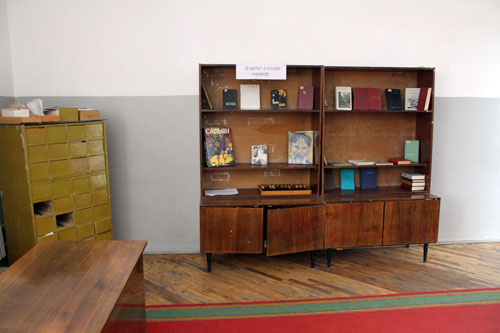 The green drawers on the left are the card catalog, and the shelves are meant to be a display of new or interesting material – except the library has not received any new materials since 1994, nor is there any planned funding for future acquisitions. Of more concern is the card catalog, the metal rods and drawer pulls from which were ‘salvaged’ during the Karabagh war, when there was no gas, no electricity, and no jobs to put food on the table – and scrap metal was more valuable than the library it was in: 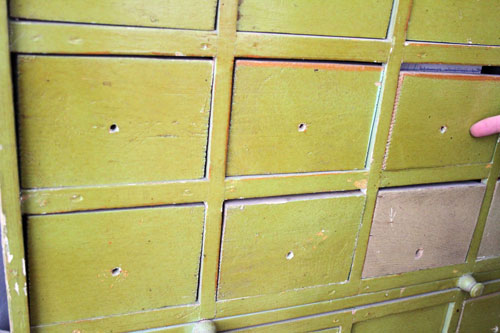 As a result, the catalog has gotten a bit disorganized: 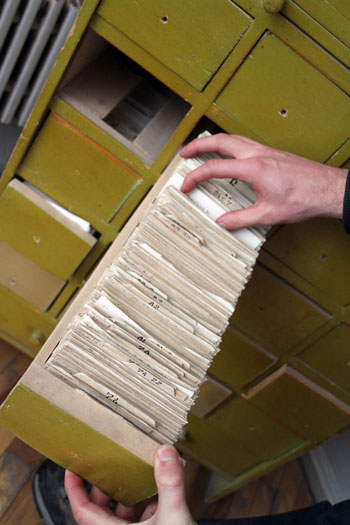 … and some cards have been lost entirely, making it difficult for the library staff to keep track of the more than 100,000 volumes in their collection – which were hard enough to keep track of, even without the difficulty of an incomplete catalog: 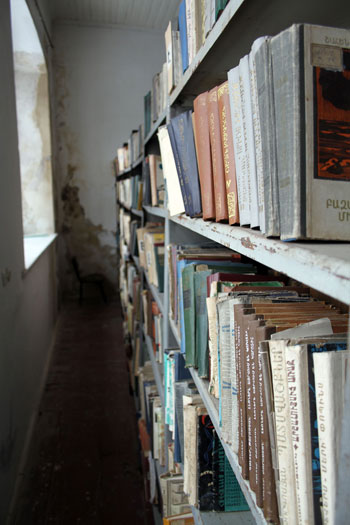 Borrowing records for the more than 6,000 patrons (including around 2,000 juvenile borrowers) are tracked on paper as well, making them susceptible to loss and tampering: 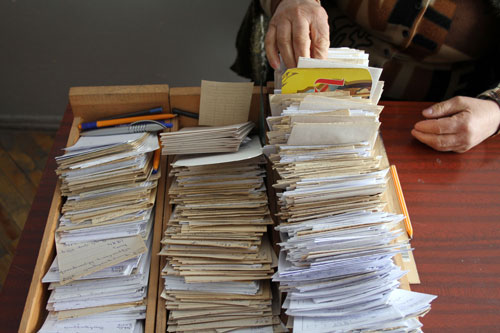 The catalog was the problem that bothered Zoya, the head librarian, the most. There are other difficulties as well. The Goris public library occupies the entire second floor of the culture house, a large Soviet-era building with a center courtyard and numerous windows. Stacks take up half the area, while the remaining half houses two reading rooms and offices for the staff. Although radiators are in place, the building is not currently heated during the winter, so the staff spend much of their time around a woodstove in a small room near the stairs (so they can hear patrons coming to the library): 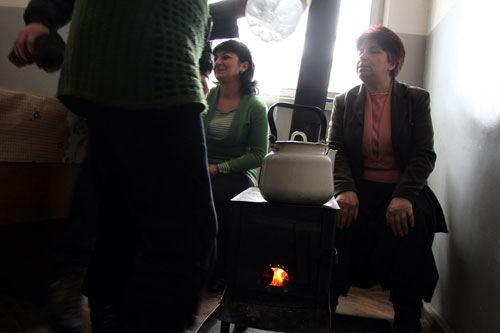 Water is only available in the building for a few hours every day, so the staff have to store it in plastic bottles if they want to have tea or coffee or to wash their hands: 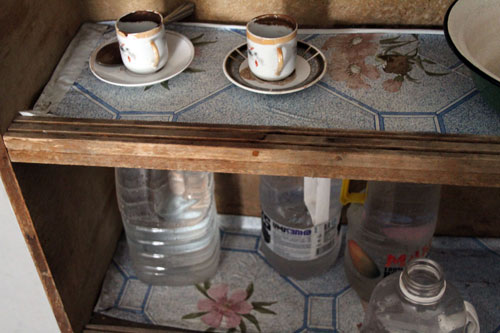