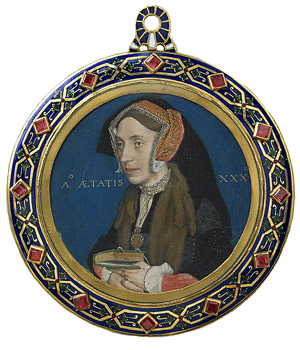 Erasmus wrote many epistels to her, and dedicated his commentaries on certaine hymnes of Prudentius to this gentlewomen, and calleth her the flower of all learned matrones of England. Nor was she meanlie learned. She compounded in Greeke and latyn both verse and prose, and that most eloquentlie. Her witt was sharpe and quicke, and to giue you a tast thereof, knowe this: Sainct Ciprians workes had bene in those dayes oftentymes printed, yet there remained amongst other faults one notable vncorrected, and thereof no perfect sence [c]ould be made, to the laming and blemishing of a most notable sentence and testimonie of so ancient and sacred a writer. The wordes were these: Absit enim ab Ecclesia Romana virgorem suum tam prophana facilitate dimittere, et nisi vos seueritatis, euersa fidei maiestate dissoluere. Which place when mistris Margaret red, presentlie, without any helpe of other example or instruction, ‘These wordes nisi vos must be,’ saith shee, ‘neruos.’ So the sentence, by mending of that worde nisi vos into neruos, is made plaine and perspicuous. This correction of hers is noted by Iohn Costerus in his commentaries vpon Vincentius Lirinensis, and Pamelius in his annotations on Sainct Ciprian epistle 31. … Yet for all this, shee was of that modestie and rare humilitie that shee misliked to heare her selfe praysed for any qualitie. She thought so lowlie of her owne witt and learninge that she was ashamed to haue any man to see her workes. This minde of hers greatlie pleased her Father [Sir Thomas More].

Margaret also translated Erasmus’ treatise on the pater noster into English; her daughter, Mary was, according to the Lyfe of Syr Thomas More, a translator as well:

This gentlewoman verie handsomlie translated the Eccliesiasticall historie of Eusebius out of Greeke into Latyn, and after into English yet extant, to the shame of the hereticall [translation] of Meridith Hanmer … She translated the Historie of Socrates, Theodoretus, Sozomenus and Euagrius. Theis of her modestie [she] caused to be suppressed. She also translated a treatiese of her grandfather, Sir Thomas, made vpon passion; and so elegantlie and so eloquentlie hath penned it that a man would thinke it were originallie written in the English tongue by Sir Thomas hym selfe (149f.)