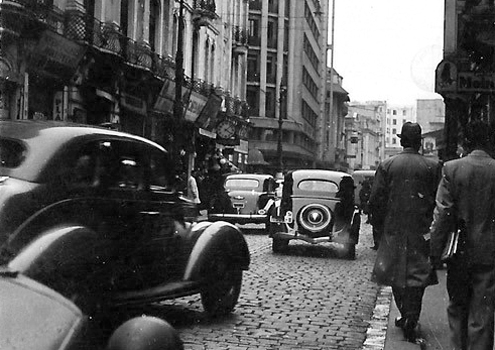 From a series of postcards of Bucharest in the 1940s.

This is an odd way to start a consideration of Olivia Manning’s Balkan Trilogy, but I want to take a moment to think about Graham Greene. His novels inhabit a peculiar country; it is diverse place, sometimes disguised as Central America or Africa or Turkey or England, but always recognizably Greeneland.1 How do you know if you’re in Greeneland? The background keeps blurring out of focus, and the ‘natives’ seem like they’re in fancy dress – extras in a drama not their own.

The geography of The Balkan Trilogy is not quite so transparent; the Romania and Greece Manning writes about are clearly the Romania and Greece that exist in the world as one commonly knows it, with some reservations. They are countries of expatriation, places to dwell but not really to live – more important as an ‘other’ or point of projection than as nation-states. Where Greeneland is a backdrop for his characters’ dramas and entertainments, Manning’s Balkan states are stories the characters tell themselves: about their own patina of civilization, about poverty, about love and war and fairness and their own transitory, fictive existence.2

Don’t the Romanian governing classes resemble Dracula, all dark hair, bloodless faces, and thirst for human life; aren’t the Greeks Zorba-like in their hunger for pleasure and general humanity? ‘Aren’t we in Ruritania?’ asks a supercilious British diplomat (156), as though handling the SS were the same as dealing with Rupert of Hentzau. This is the characters’ attitudes, rather than Manning’s, who does give a suggestion of personality and even personhood behind the greasepaint. The Pringles’ cook and maid of all work, Despina, for example, is more than a slattern peasant; she laughs with Sasha the fugitive, disapproves of Yakimov, and supports her husband while living in a room not much larger than a broom-closet. The reader feels there is a story there, one that is frankly more interesting than the Pringles’ mediocre marriage. The Pringles and their expatriate community are prisoners of imagination, and don’t begin to see reality until it takes the form of an invading army; Yakimov doesn’t understand it even then. The only thing left is flight – but not escape.