Anxiety of Influence (i): Laurence Sterne

The Life and Opinions of Tristram Shandy, Gentleman is one of the best books ever published in English; it is an escapade in the best sense of the word, flouting conventions both visual and narrative, and bearing no further resemblance to the common eighteenth century novel than having once been printed on paper, bound between boards, and being seldom entirely read today.1 It defies classification and the dictates of genre; it plays games and frustrates all expectations; it is, as too few books are, active.2

This is all very fine, but is it literature? If the role of literature is to improve the reader, to lift him from his daily trials to a new and edifying understanding – purifying the reader of his habitual dross, as it were, and setting him down again, clean and fresh, to see the world anew – then Tristram Shandy is most emphatically not literature.3 It is a novel which plucks the reader up only to plunk him down, firmly, in the muck and mire of everyday life, with nary by-your-leave nor apology tendered.

All of that, of course, was simply a pompous way of asking: why is it worth reading? Why should anyone care to read a biography which says very little about the life its subject, and, despite its claims, shares very few of his opinions? Why should anybody bother to read a centuries-old ‘experimental’ novel, in which the sentences wander whither they will, often to the length of paragraphs, marked only with dashes and the sporadic semi-colon? Why should a reader put up with Sterne’s tricks – what’s the recompense? 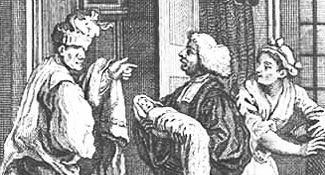 One of the first things a reader notices about Tristram Shandy is its appearance; rather like its eponymous narrator, whose nose was crushed at birth, the dress of Sterne’s novel is, shall we say, distinctive. It is story in love with being a book; the black page of morning for Yorick, the motley page (the meaning of which I do not understand nor, I think, am meant to), the space left blank for the reader to provide his or her own description of the beauty of the Widow – all of these are forms of expression impossible without a page. The introversion of the book and the ‘self-awareness’ of its form – that is, its character as novel qua book rather than mere narration for the story-hour – is perhaps one of things which made it so attractive to the typographer Jan Tschichold. It is also unsettling, I suppose, for the reader, welcoming Tristram’s conversational tone, to be confronted with a foot-note, or a dash, or a row of ellipses; how, after all, is one to pronounce them?

It is, I admit, a curious sort of biography in which one seems to learn so little about the subject. Tristram, famously, is not the hero of his own life, and I find it fitting that he is not the hero of the book about that life. In this Tristram Shandy is a far more honest (though no less complicated) book than, say, David Copperfield or the novels of Smollett, Richardson, and Burney – or even, dare I say, Tom Jones. Indeed, as an account of the life and opinions of Tristram Shandy, narrated in the first person, Sterne’s novel is as straightforward as could be desired. His account begins, as most human lives do, with coitus, and ends, as also lives do, unexpectedly, with silence. The narrative time Sterne devotes to each stage of life in between reflects, in its own strange way, the relative perception of time felt by a child and an adult.4 Nearly a third of the book elapses before Tristram is born, another third at least concerns the birth itself (with attendant woes), but then it’s almost over – character cast, education acquired (or not), and the manner indelibly marked. That strange trip to France (with concomitant excurses) happens on the waning side of Tristram’s prime, but it could just as well have been at any time, last month, yesterday, tomorrow – it doesn’t matter to the narrative, just as, in life, it does not matter if one goes here or there in this year or that, suffice it that one goes. The major details are irrelevant – it’s in the habits, the cast of mind that Tristram’s life (or any life?) occurs.

Picky readers will want to know, though, why Sterne says so much about the opinions and habits of Tristram’s father and uncle, when the novel claims to be about Tristram’s ‘life and opinions.’ There is, I think, a very obvious answer for this; because Tristram is the narrator, everything Sterne presents us is filtered through Tristram – Tristram can, effectively, ‘choose’ what he wishes to tell the reader, and when he wishes to do so. Just as most people do not expect their friends to deliver, up front, a summary of their opinions, but become acquainted with those opinions (in all their oddity) over time through communication, so too Tristram reveals his opinions with his character sketches of Slop or Trim, or in the affectionate portraits of his father and Uncle Toby, or in citing French tracts on the baptism of the fetus. Exhausting it may be, direct it certainly is not; and Sterne pointedly addresses the reader’s expectations near the beginning:

I know there are readers in the world, as well as many other good people in it, who are no readers at all, – who find themselves ill at ease, unless they are let into the whole secret from first to last, of every thing which concerns you.

The shift from the third to the second person is key, I think, to the character of the book; the ordinary novel speaks to the world at large, Tristram Shandy seemingly speaks to you (that second person singular), book in hand. Which is disconcerting, as though it were fan-fiction gone horribly wrong; but it is the original, and remains an original, centuries later.

L**d! said my mother, what is all this story about?—

A Cock and a Bull, said Yorick—And one of the best of its kind, I ever heard.

Behind those querulous interrogatives mentioned above, those simple-minded questions so superficially concerned with Tristram Shandy’s alleged literary merits, with its humor, its virtues and its vices, are much larger, more dangerous questions. Why does one bother to read at all? What does one look for when reading? What expectations does one have when facing a work of ‘literature’, a work of literature, too, which has survived (despite the doubts of Dr. Johnson) and exerted an influence on innumerable and disparate writers (James Joyce & Dave Eggers spring (improbably) to mind)? These – no matter what the critics may say – are personal questions, and the validity of any answer would be so narrowly limited as to be of dubious import, for there could be nor wrong nor right in them.5 More important than the answers are the questions themselves and the desire which drives one to ask them – without that, what would be the use in reading?6