One remark more about your reading. I do not know whether it has been sufficiently brought home to you that there are two kinds of books. When a man is reading on any kind of subject, in most departments of books – in all books, if you take it in a wide sense – you will find that there is a division of good books and bad books – there is a good kind of a book and a bad kind of a book. I am not to assume that you are all ill acquainted with this; but I may remind you that it is a very important consideration at present. It casts aside altogether the idea that people have that if they are reading any book – that if an ignorant man is reading any book, he is doing rather better than nothing at all. I entirely call that in question. I even venture to deny it. It would be much safer and better would he have no concern with books at all than with some of them. You know these are my views. There are a number, an increasing number, of books that are decidedly to him not useful. But he will learn also that a certain number of books were written by a supreme, noble kind of people – not a very great number – but a great number adhere more or less to that side of things. In short, as I have written it down somewhere else, I conceive that books are like men’s souls – divided into sheep and goats. Some of them are calculated to be of very great advantage in teaching – in forwarding the teaching of all generations. Others are going down, down, doing more and more, wilder and wilder mischief.

– Thomas Carlyle,
(On the Choice of Books) 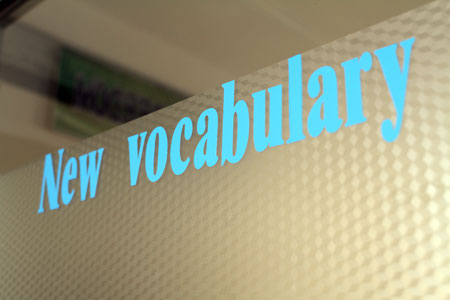 The other sign in the classroom says
‘Knowledge is essential to freedom’.

The words, partly taken from other dictionaries, and partly supplied by himself, having been first written down with spaces left between them, he delivered in writing their etymologies, definitions, and various significations. The authorities were copied from the books themselves, in which he had marked the passages with a black-lead pencil, the traces of which could easily be effaced. I have seen several of them, in which that trouble had not been taken’ so that they were just as when used by the copyists. (110)

Some of these more solemn papers attracted the notice of Dr. Young, the authour of The Night Thoughts, of whom my estimation is such, as to reckon his applaus an honour even to Johnson. I have seen volumes of Dr. Young’s copy of the Rambler, in which he has marked the passages which he thought particularly excellent, by folding down a corner of the page; and such as he rated in a super-eminent degree are marked by double folds. I am sorry that some of the volumes are lost. (127)

Women from the surrounding rural districts come to the city to sell food; milk and yogurt in the morning, and vegetables in the afternoon. Running late for school one morning, I saw two women quarrel over their barrels of yogurt. Three men in fur-collared coats had difficulty in keeping them apart, as they went at each other with ladles and rocks, milk and gravel spraying the nearby cars.