paper bullets of the brain

After a while books grow matter of fact like everything else and we always think enviously of the days when they were new and wonderful and strange. That’s a part of existence. We lose our first keen relish for literature just as we lose it for ice-cream and confectionery. The taste grows older, wiser and more subdued. We would all wear out of very enthusiasm if it did not&#8230

He found the inner harmony and kinship of words. Where lived another man who could blend the beautiful and the horrible, the gorgeous and the grotesque in such intricate and inexplicable fashion? Who could delight you with his noun and disgust you with his verb, thrill you with his adjective and chill you with his adverb, make you run the whole gamut of human emotions in a single sentence?

A few months ago, I was reading Nikolaus Pevsner’s 1968 article on ‘The Architectural Setting of Jane Austen’s Novels’ and it got me to thinking. It must have, for here I am, still muddled by it months after the fact, which is not something that normally happens after my late-night debauches on JSTOR. In brief, the article discusses various buildings in England which may have served as models for places in Jane Austen’s novels, and it also has a rather interesting discussion of the geography of London in Jane Austen’s life and works, complete with a map showing where various characters stayed when they happened to be in town. 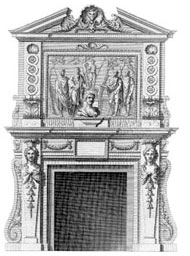 Pevsner also looks at the price of chimney pieces,1 and this is what has enthralled me. Now of course you remember that Mr. Collins is very pleased about his close acquaintance with Lady Catherine de Bourgh, and is fond of bragging about the lavishness of Rosings, her stately country home, with its chimney piece costing £800. Austen drops this charming fact with the nonchalance of a flirt dropping a handkerchief, and in dashes the magician Pevsner, tossing out references to the prices of chimney pieces from between 1700 and 1800. Thus we find that, indeed, the chimney piece at Rosings was very expensive, compared to the current standards of the day: perhaps three times what was spent in apparently comparable structures. This will not come as a surprise to even the most casual reader of Pride & Prejudice, but raises some small questions about the character of Mr. Collins 2. What I like about the article is that not only does Pevsner not attempt to answer these unanswerable questions, he does not bother to ask them. They are left to the reader to imagine – which is after all, the reader’s job, isn’t it?

To do any thing, to dig a hole in the ground, to plant a cabbage, to hit a mark, to move a shuttle, to work a pattern, – in a word, to attempt to produce any effect, and to succeed, has something in it that gratifies the love of power, and carries of the restless activity of the mind of man. Indolence is a delightful but distressing state. We must be doing something to be happy.

—William Hazlitt
(‘On the Pleasure of Painting’,
from Table Talk)

And in choosing, from the mid-afternoon drowse, between a biography of Virginia Woolf, some slightly silly essayettes,1 and English Society in the Eighteenth Century (which is, as it sounds, an introductory history to society in 18th century England), I must choose the latter – because its aims are clear, and it will not fight with me as I try to keep sleep at bay, or quarrel at my lack of thought or attention, but will slowly, smoothly, slide forward in a haze of pocket boroughs, port, window taxes, and roast beef.

I knew a gentleman, who was so good a manager of his time, that he would not even lose that small portion of it, which the calls of nature obliged him to pass in the necessary-house; but gradually went through all the Latin poets, in those moments. He bought, for example, a common edition of Horace, of which he tore off gradually a couple of pages, carried them with him to that necessary place, read them first, and then sent them down as a sacrifice to Cloacina: this was so much time fairly gained; and I recommend you to follow his example. It is better than only doing what you cannot help doing at those moments; and it will made any book, which you shall read in that manner, very present in your mind.

—Earl of Chesterfield
(Letters to His Son…, letter 21)

…or observations on using a digital reader.1

My brain hasn’t figured out the digital reader yet.2 It doesn’t know how to process the small swiping screen of text with the same efficiency as even the most crabbed, cramped printed page. Of course that efficiency is the product of decades of practice, which obviously haven’t been possible with the digital reader as yet. Perhaps I’m taking in the same percentage of words on any given page, but as the ‘pages’ are so much smaller, I end up actually reading a greater proportion of the text as a whole.

Because of the effort required to read less attentively, I’ve paradoxically been reading more closely than I normally would out of sheer laziness. Some books can bear the weight of this extra attention. I first noticed it when reading Jane Austen – she was prepared for me to read every word; Charlotte Brontë wasn’t, really, to my surprise and disappointment. This might be the result of a changed perspective – a natural result of the passage of time – but I prefer to blame the books: the Villette and Jane Eyre that I read this past summer were completely different books from the ones I read when I was seventeen – and I don’t think they were much improved by the intervening years. They aren’t the same books they were; but of course they are.