I always thought that he did himself injustice in his account of what he had read, and that he must have been speaking with reference to the vast portion of study which is possible, and to which few scholars in the whole history of literature have attained; for when I once asked him whether a person whose name I have now forgotten, studied hard, he answered ‘No, Sir. I do not believe he studied hard. I never new a man who studied hard. I conclude, indeed, from the effects, that some men have studied hard, as Bentley and Clarke’. Trying him by that criterion upon which he formed his judgement others, we may be absolutely certain, both from his writings and his conversation, that his reading was very extensive. Dr. Adam Smith, than whom few were better judges on this subject, once observed to me, that ‘Johnson knew more books than any man alive’. He had a peculiar facility in seizing at once what was valuable in a book, without submitting to the labour of perusing it from beginning to end. He had, from the irritability of his constitution, at all times, and impatience and hurry when he either read or wrote. 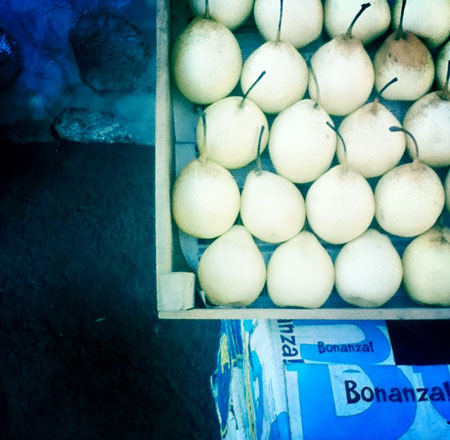 pears before նոր տարի
These pears were remarkable both for their color and their flavor,
and the pigs had already been slaughtered.

‘That’s the nice thing about foreigners,’ said the fat woman who had stopped in at the corner shop, ‘they’re always willing to acknowledge you.’ She was, as the poet said, spherical, like a globe, rather bilious in her fur coat, and completely blocked the narrow square of floor between the door and the queue for the shop counter. Until that time I’d always heard the word ճանաչել in the sense of ‘to recognize’ or ‘to be acquainted with’, but as I was the foreigner thus commented upon, and as I had never seen this woman before in my life1 – though I had committed the error of making eye-contact, as she was blocking my way into the shop and I desperately needed yogurt2 – I was obliged to revise my understanding.

The shop keeper rolled her eyes, and rang up my yogurt.

You cannot persuade a party of frenzied nationalists that two blacks do not make a white; consequently, no day went by without a catalogue of complaints from both sides, Armenians and Tartars, of unprovoked attacks, murders, village burnings and the like…

Azerbaijan Diary is an interesting book to read, and a troubling one to comment on; especially troubling while sitting in the ‘strategic’ town of Goris on the road to NK (Nagorno-Karabagh).1 In short, the book is a journalist’s account of the conflict over NK2 and the development of independence in Azerbaijan during the break-up of the Soviet Union.3

Part of me wants to complain about the proof-reader falling asleep for the second half of the book, leading to sentences entirely in lower-case, and young men stripped to the ‘waste’; part of me wants to complain about infelicities of style: surely one need not compare all war-profiteers to Milo Minderbender, nor say that all politicians talking out their ass are speaking ‘delphically’, however prophetic they end up being? This, however, would not be fair, and is merely an attempt to hide my unease with irrelevant fault-finding.

The source of this unease is simple: I feel a deep affection for the town of Goris and for the people who live in it, for the students and teachers I work with, for the friends that I’ve made, and even for the random kids on the street who shout ‘bonjour’ after they’ve passed me in the street (being too shy to say it to my face, of course). Life is hard for the people who live here; there’s not a lot of money, and they have indeed suffered at the hands of history. This is something that Goltz notices during a brief visit to Yerevan in 1993, but with a twist:

What did it all mean? Why was everyone so uniformly happy to tell us how bad things were? Had they been programmed, or had everyone in the country somehow instinctively ‘felt’ the need to use a certain vocabulary to express it? In a weird way, everyone seemed eager not only to accept the miserable state of affairs brought on by the war, but to advertise it – without mentioning the war itself. Although no official would say this, we were left with the lingering sense that the government had succeeded in making the war touch everybody, that is, they had managed to put the country and its citizens into a war economy and a war psychology… (311)

Which makes sense for the purpose of nation-building, and surviving the trauma of the USSR falling apart, but for the purposes of truth and justice,4 it seems cynical and disheartening.

After reading this book it is more than ever clear to me that if Armenia the nation5 wants the state of Turkey to acknowledge the genocide of 1895–1915, it would behoove the state of Armenia to acknowledge the ethnic-cleansing it did in NK in the 1990s, or for that matter in Zangezur/Syuniq in the 1920s.6 Sadly, it would be political suicide for any politician brave enough to attempt it, and that is a great shame, and I am sorry for it.7

The Age of Property holds bitter moments even for a proprietor. When a move is imminent, furniture becomes ridiculous, and Margaret now lay awake at nights wondering where, where on earth they and all their belongings would be deposited in September next. Chairs, tables, pictures, books, that had rumbled down to them through the generations, must rumble forward again like a slide of rubbish to which she longed to give the final push, and send toppling into the sea. But there were all their father’s books – they never read them, but they were their father’s, and must be kept. There was the marble-topped chiffonier – their mother had set store by it, they could not remember why. Round every knob and cushion in the house sentiment gathered, a sentiment that was at times personal, but more often a faint piety to the dead, a prolongation of rites that might have ended at the grave.

It was absurd, if you came to think of it; Helen and Tibby came to think of it: Margaret was too busy with the house-agents. The feudal ownership of land did bring dignity, whereas the modern ownership of movables is reducing us again to a nomadic horde. We are reverting to the civilization of luggage, and historians of the future will note how the middle classes accreted possessions without taking root in the earth, and may find in this the secret of their imaginative poverty.